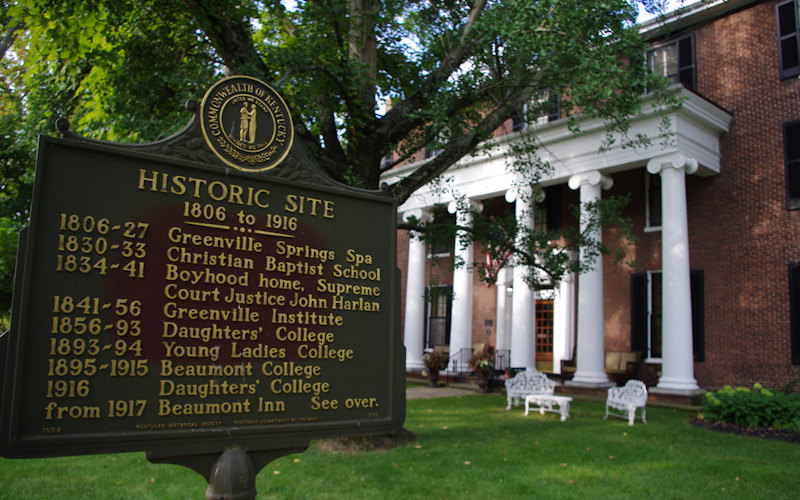 Constructed in 1845, the building which is now the Main Inn at The Beaumont Inn was a school for young ladies of our grandmothers’ and great grandmothers’ day. It was owned by Dr. Samuel Mullins and operated as Greenville Institute until 1855.

For the next forty years, the school was known as Daughters College and was under the direction of Mr. John Augustus Williams, former president of the University of Kentucky.

In 1894, the school was bought by Colonel Thomas Smith. The school operated as Beaumont College until 1916. It was purchased by Mr. and Mrs. Glave Goddard in 1917 and converted by them into the Beaumont Inn two years later.

Now, a century afterward, descendants of the Goddards continue to refine the art of southern hospitality. Here in a park-like setting of centuries-old forest trees, serenely remote from the cares of the work-a-day world, the fourth and fifth generations of the family now open the doors of The Beaumont Inn to welcome guests to their heritage and hospitality.

In addition to the Main Inn Building (also houses the Old Owl Tavern and Owl’s Nest Lounge), we have: 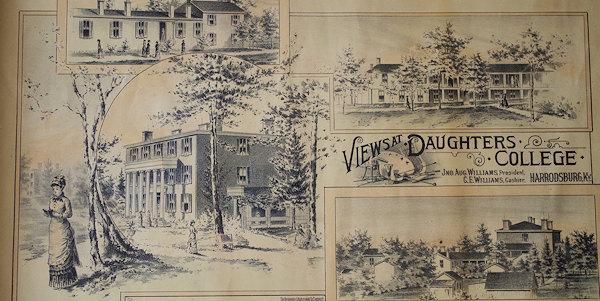 History of Beaumont: The Full Story
There was originally a wooden and log structure on this site that was the boyhood home of John M. Harlan, who became Chief Justice of the United States Supreme Court. Dr. Samuel G. Mullins purchased the property in 1841 and founded the Greenville Female Institution, which operated until 1856. In May of 1841, the original cabin was destroyed by fire. It was replaced by the present, sturdy, three-story brick structure, which was completed in 1845. Dr. Mullins operated the school successfully until 1856 when he sold it to John Augustus Williams. Williams, founder of Christian College in Columbia, South Carolina, and the first president of the University of Kentucky (Bacon College) when it was in Harrodsburg, Kentucky, changed the name to Daughters College. Having lost his only two daughters in their early teens, Williams took the students under his arm of fatherhood and said, “all of these girls will be my daughters” and he guided their education as if they had been his own.

In the first Daughters College Catalog issued for the school, the true Greek revival style building was described as “an elegant brick mansion, 80 by 52 feet, three stories high, well ventilated, built with hollow walls to prevent dampness in the rooms, and secured by a metallic roof and other means against liability to fire, and most ample dining room, kitchen, and bathroom, completed at a cost of $10,000 and now prepared for the accommodation of 100 pupils.” Six white Ionic Columns made of solid, round-edged bricks and covered with cement support the two-story front porch. The walls of the building are 18 inches of solid brick with ventilating spaces; all bricks were fired here on location. The ceiling on the first floor is 11 ½ feet high, the second floor is 10.5 feet high, and the third floor is 9.5 feet high. Many of the windows contain the original hand rolled glass panes. The original windowpanes in the bedrooms show proof of engagements, dear friends, and their own names and dates that were cut out by students’ diamond rings.

The school, under Professor Williams, operated during the Civil War (1861-1865). Kentucky was a neutral state during the Civil War and many well-to-do southern families sent their daughters to the college to escape the hostile environment of the oncoming war. History proved Kentucky to be a crucial part of the Civil War and one of the bloodiest battles of the war took place about 15 miles to the west of this property. As the Union and Confederate armies engaged on October 8, 1862 cannon fire could be clearly heard by the students. Most local churches acted as temporary hospitals for the wounded.

Due to Williams’ failing health, 1895 brought about a change in ownership of the school. The new owner of the school was Colonel Thomas Smith, born in Virginia and a graduate of the University of Virginia.

It was said that Professor Williams was extremely sentimental about the name Daughters College and requested that the name be changed upon the completion of the sale. Consequently, as Colonel Smith and his wife approached the building for the first time by horse and carriage from Lexington, Kentucky, they realized the building stood on one of the highest points in the town. Mrs. Smith felt Beaumont, a French word meaning “beautiful mount,” would be an appropriate name. Colonel Smith spoke seven languages, all of which he taught at the new Beaumont College.

After Colonel Smith’s death in 1914, Beaumont College experienced financial difficulties due to the increased demand and popularity of public schools. After closing the school in 1917, the property was divided into tracts and sold at a public auction.

The new ownership brought a new era to the Beaumont story. For sentimental reasons Glave and Annie Bell Goddard purchased the Beaumont College building and about ½ acre of land surrounding it for $7,800 in 1918. Annie Bell graduated from Beaumont College in 1880, taught mathematics and later became the Dean of Beaumont College. It naturally became an Inn in response to high demand in return visits of the students to their Alma Mater. Beaumont Inn has been in the same family since that time. Pauline Goddard Dedman followed her mother as innkeeper, who was followed by her son and his wife, Thomas “Bud” Curry Dedman, Jr. and Mary Elizabeth Ransdell Dedman. The present owners C.M. “Chuck” and Helen W. Dedman are joined by their son Samuel Dixon Dedman, the fifth generation, making Beaumont Inn Kentucky’s oldest family-operated country inn. 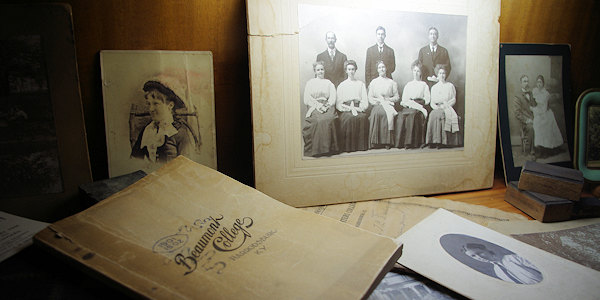 Furnishings throughout the Inn
Inside the Main Inn, see a big collection of historic photos and interesting artifacts – a wonderful museum of Kentucky history. The room on the right of the entrance, now the Front Desk of the Inn, was the school library. Lining the walls are the original cherry bookcases filled with old books used by the students and teachers. Sometime prior to the Civil War, other bookcases were added to the original ones using walnut, apple, and popular.

Across the wide entrance hall reside the double parlors, which display an elegant fireplace and wallpaper decorated with red poppies. A family, from the Madeira Island off the coast of Portugal, specially made the curtains of embroidered cutwork linen for the parlor windows of the Inn. The crystal chandeliers, pier mirrors, and mantel mirrors all came from the original Galt House in Louisville, Kentucky when it was dismantled prior to being torn down. The beautiful old Steinway parlor grand piano is made of mahogany and was given to Miss Bessie Dedman, a great aunt, by her father, Mr. Charles M. Dedman, when she was fourteen years old in 1893. A collection of Empire and Victorian tables, chairs, and lamps makes an enticing place for quiet conversations or a sing-along around the piano.

On the west wall are paintings of George and Martha Washington. On the east wall of the back parlor is an interesting petit point portrait of Christ in the garden of Gethsemane. Nuns in a convent stitched the petit-point over 170 years ago. It was presented to Anne Bell Goddard to be hung in the Inn parlor around 1930. Also, in the back parlor is a gold and glass cabinet which contains over 100 Antique Master Salts, collected by Alice Gossett Ransdell, sister-in-law of Mary Elizabeth Dedman.

The central hall is dominated by twin stairways leading to the second and third floor bedrooms. Under the south stairway stands an antique walnut, handmade teacher’s desk used by Anne Bell Goddard when she taught at the college. Nearby, atop a cherry chest, stands a display cabinet containing an old sawdust china-headed doll and chair that originally belonged to Aunt Bessie Dedman.

Most prominent in the central hall is the gold-plated Cleopatra clock and table that was sent from France for the French Exposition at the 1893 World’s Fair in Chicago. The dome is onyx, the numerals are Egyptian, and the hands are in the form of an asp, thus the name Cleopatra Clock. The gold leaf electroplating was a new process used in France at the time of the World Fair and was sent over to the United States to promote this new style of decorating. Located in the same vicinity is a sturdy, large wooden chair that was used by Franklin D. Roosevelt in 1934 when he visited Harrodsburg to dedicate the George Rogers Clark Monument at Old Fort Harrod. Opposite the clock is a handsome antique Empire sofa. Above the sofa are portraits of Thomas Bell and his wife, Sarah Connor Bell, who are great, great grandparents of the present Innkeeper.

The antique doll on display on top of this chest is dressed in her original costume made prior to 1840. Her hand-sewn kid body is stuffed with sawdust. Buttons on the dress and buckles on the shoes are of cut steel. Her hairstyle is most unusual for a doll of this era. The doll was given to Pauline Bell Goddard Dedman as a gift from a friend.

At the end of the hall is the James Harrod Room. This is used as a card room, a meeting room, or for small gatherings for conversation. On the walls are framed pictures, diplomas, and newspaper clippings of Beaumont College and Beaumont Inn.

In the center of the second-floor hall is a lovely old mahogany roll top secretary that belonged to great, great grandfather W.T. Curry, who purchased it about 1850. Grandfather Curry was a master carpenter and contractor who built many of the local homes.

The guest rooms are furnished with antiques inherited from four sides of the family or that were collected by the owners. Several rooms contain four-poster beds, a chest of drawers or marble top dresser, large armchairs, small bedside tables, writing tables, spool beds, or very high Victorian beds or magnificent cannonball beds. The woods used in these beds and chests are primarily cherry, walnut, mahogany, pine, or maple. Electrified antique chandeliers light the rooms.

A poem written by Annie Bell Goddard entitled “The Pearl” is found in every guestroom as tribute to her memory and inspiration. Her warm hospitality and graciousness were the beginning to the story and for four generations we have tried to maintain the same Kentucky Southern hospitality.

In the fall of 2003, the city of Harrodsburg passed the local option ordinance, which allowed Beaumont Inn to acquire a liquor license. Almost immediately the Dedman family began “construction” of the Old Owl Tavern, which is located on the south end of the Main Building. Originally the carriages and wagons were stored here. The original limestone foundation and oak beams have been exposed. The fireplace and wine cage are original to the property. The pictures decorating the walls are of distilleries here in Mercer County before Prohibition. The name comes from Old Owl Kentucky Whiskey, which was distilled at the Dedman Distillery on the Oregon Road here in Mercer County. Be sure to stop in, try the casual menu or taste one of Kentucky’s famous bourbons.

In the winter of 2009, we transformed the former meeting room/private dining room into the Owl’s Nest. Originally this was the primary department of the College. Day students from kindergarten (way ahead of their time) through high school were accepted. When the building became an Inn, this room was an antique shop, a TV room, Rotary room, private dining, and now the Nest. Be sure to check it out!

Also read the history of Harrodsburg.