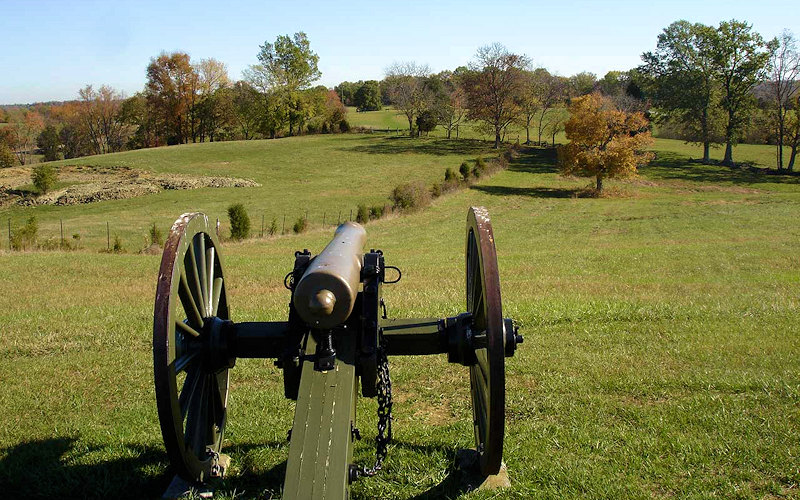 Due to COVID-19, please check with the site itself for the most updated information.

Also see our guide to the Bluegrass Region!

Located near Beaumont Inn historic bed and breakfast are two very important Civil War sites to visit. Camp Nelson provided the Union Army with over 10,000 African-American soldiers, making it the third largest recruiting and training depot for African Americans in the nation. Many of the black soldiers brought their families with them to Camp Nelson and eventually the army established a refugee camp for these individuals. Thousands of African-Americans came to Camp Nelson and it was here that they gained their freedom.

Camp Nelson Heritage Park is located along US 27 about 20 miles south of Lexington, 6 miles south of Nicholasville on US 27, and 7.5 miles southeast of Wilmore along US 1268. The Park entrance is on the original Danville Pike, adjacent to US 27, one mile north of the Camp Nelson National Cemetery.

The other nearby Civil War site is Perryville Battlefield, near Danville. On October 8, 1862, Watkins and 18,000 Confederates clashed with 20,000 Union troops on the hills outside of Perryville. Nearly 8,000 soldiers were killed and wounded in what became Kentucky’s largest Civil War battle. The Confederates’ failure to attain a decisive victory kept Kentucky in Union hands for the remainder of the war, influenced northern Congressional elections, and gave President Lincoln the political acumen needed to issue a preliminary version of the Emancipation Proclamation. Perryville is indeed a site of national significance.

Now, 150 years later, Perryville is one of the most pristine battlefields in the nation. The presence of the Perryville Battlefield State Historic Site, coupled with historic Merchants’ Row, the town’s antebellum commercial district, makes Perryville the ideal place to study 19th-century military and civilian life.

Description: Confederate Gen. Braxton Bragg’s autumn 1862 invasion of Kentucky had reached the outskirts of Louisville and Cincinnati, but he was forced to retreat and regroup. On October 7, the Federal army of Maj. Gen. Don Carlos Buell, numbering nearly 55,000, converged on the small crossroads town of Perryville, Kentucky, in three columns. Union forces first skirmished with Rebel cavalry on the Springfield Pike before the fighting became more general, on Peters Hill, as the grayclad infantry arrived. The next day, at dawn, fighting began again around Peters Hill as a Union division advanced up the pike, halting just before the Confederate line. The fighting then stopped for a time. After noon, a Confederate division struck the Union left flank and forced it to fall back. When more Confederate divisions joined the fray, the Union line made a stubborn stand, counterattacked, but finally fell back with some troops routed. Buell did not know of the happenings on the field, or he would have sent forward some reserves. Even so, the Union troops on the left flank, reinforced by two brigades, stabilized their line, and the Rebel attack sputtered to a halt. Later, a Rebel brigade assaulted the Union division on the Springfield Pike but was repulsed and fell back into Perryville. The Yankees pursued, and skirmishing occurred in the streets in the evening before dark. Union reinforcements were threatening the Rebel left flank by now. Bragg, short of men and supplies, withdrew during the night, and, after pausing at Harrodsburg, continued the Confederate retrograde by way of Cumberland Gap into East Tennessee. The Confederate offensive was over, and the Union controlled Kentucky.

After you visit the Perryville Battlefield State Historic Site, return to our historic bed and breakfast for fine food and drink.

For more information on the Battle of Perryville and the Perryville Battlefield State Historic Site, go to their Web site.