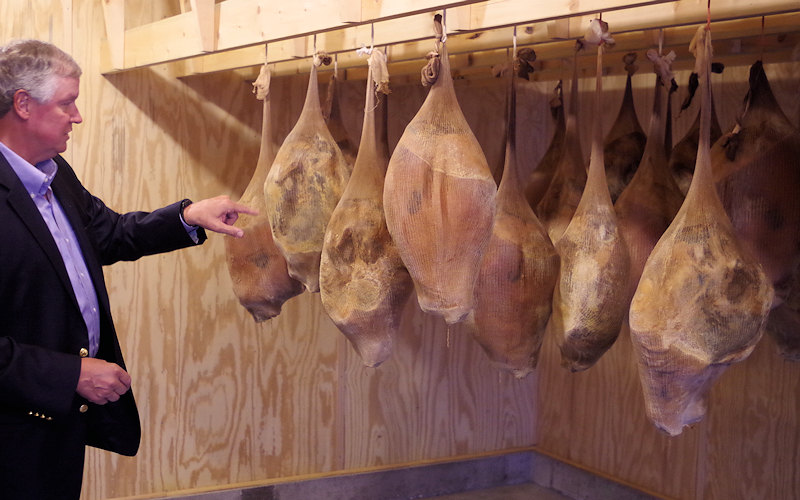 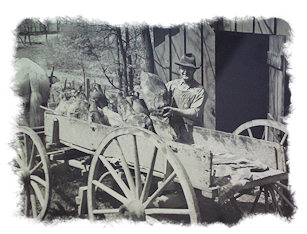 Beaumont Inn’s famous two-year old cured Kentucky cured country ham has been aged using the same process at the Inn for five generations. While most Kentucky country hams is aged up to a year, we age our hams an additional year for added flavor in our non-climate controlled “aging house” behind the Inn (photo above, with Chuck Dedman), taking advantage of the natural, seasonal fluctuations of temperature and humidity. The weather conditions in our area seem to aid the natural enzymes that produce this true Kentucky delicacy. Enjoy our ham in the Main Dining Room or Old Owl Tavern.

Like other specialty cured hams, a Kentucky ham is made in a specific way which sets it apart from other hams. Especially appreciated by food editors and connoisseurs, this aged ham is among the last of its kind — a “lost art” to which the commercialized methods of today cannot compare.

We hope you will visit us soon to enjoy our two-year-old Kentucky cured country ham! And check out our recipe for Ham Salad and other online recipes.

What is a Kentucky Country Ham?
(Writen by Evelyn Meacham at Meacham Hams) The flavor of a country ham is unmistakable. It’s good in omelets, bean soup, with brie on crackers, on Grandma’s buttermilk biscuits and any other recipes your imagination can serve up. Country ham has been a tradition in Kentucky since the first settlers arrived with their need for preserving meat without having refrigeration. Salting meat and also smoking meat have long been used to preserve meats. Kentucky families brought their secret recipes—called cures—with them when settling and handed them down from generation to generation. Most country ham “cures” consist of lots of salt, some sugar (both white and brown), sodium nitrate (which was generally found as “saltpeter”) and other spices. The salt does the curing , the nitrates prevent the ham from spoiling. The sugar and spices are strictly for flavor. Country ham is dry cured, a time honored tradition where hams are packed in salt mixed with other curing ingredients, slowly cured up to forty days, sometimes smoked and always aged. 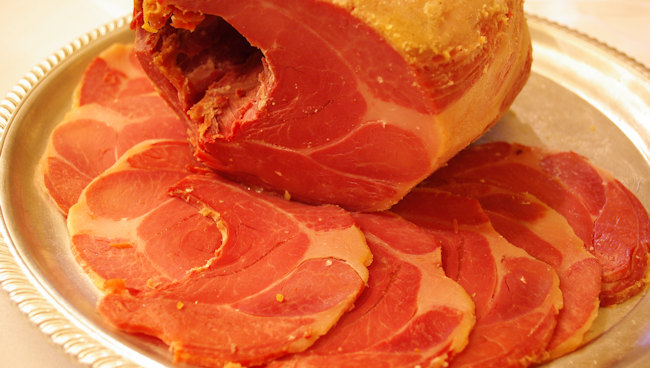 Traditionally, families would kill hogs in the late fall or early winter when the weather turned cold. The fresh ham would be hand rubbed with the cure and allowed to “rest” with the cure on it. As spring approached, settlers that wanted to smoke their hams would wash them then hang the hams uncovered in a smokehouse. Using an aromatic wood like hickory, a small fire would be built and the smoke would permeate the ham for weeks so that it had a wonderful caramel color and smoky aroma. After smoking, the hams would be left to hang allowing them to age, which is where the magic takes place. The longer the ham is aged, the more robust the flavor. Aging draws out the moisture which yields a firmer, more flavorful taste treat. The traditional country ham would not be eaten until it was a year old. If anyone could manage to hang on to a ham for longer than a year, then those hams are a true delight for the country ham lover.

In contrast, “city ham” is usually boneless, mild tasting, with water added, meaning that the cure is dissolved in water and injected into the meat. This process takes about 24 hours.

Not unlike a fine wine, a good country ham can’t be rushed; it needs to age slowly and naturally. In 1932 William Meacham began curing hams for his family and friends using the cure handed down in the Meacham family for generations. When people tasted his ham, the word spread that he had a ham to delight the country ham connoisseur. Meacham Country Hams located in Sturgis, KY is carrying on his tradition of excellence in the retailing of many fine products.

(The Meacham family has been providing our hams for many years!)

How to Cook a Kentucky Country Ham?
Saw off the hock end back to the ham proper. Wash ham thoroughly and soak in cold water overnight. Pour off water and re-cover the ham with fresh cold water. Place on stove and let come to boiling point, then, boil 15 minutes to the pound (14 lb. ham boil 3 ½ hours.) Remove from stove, take out of water and let cool. Remove skin. Pat over fat side a mixture of ½ southern corn meal, and ½ brown sugar. With fat side up put in 400 degree oven for approximately 45 minutes, or until brown on top. Dried bread crumbs may be substituted for corn meal.